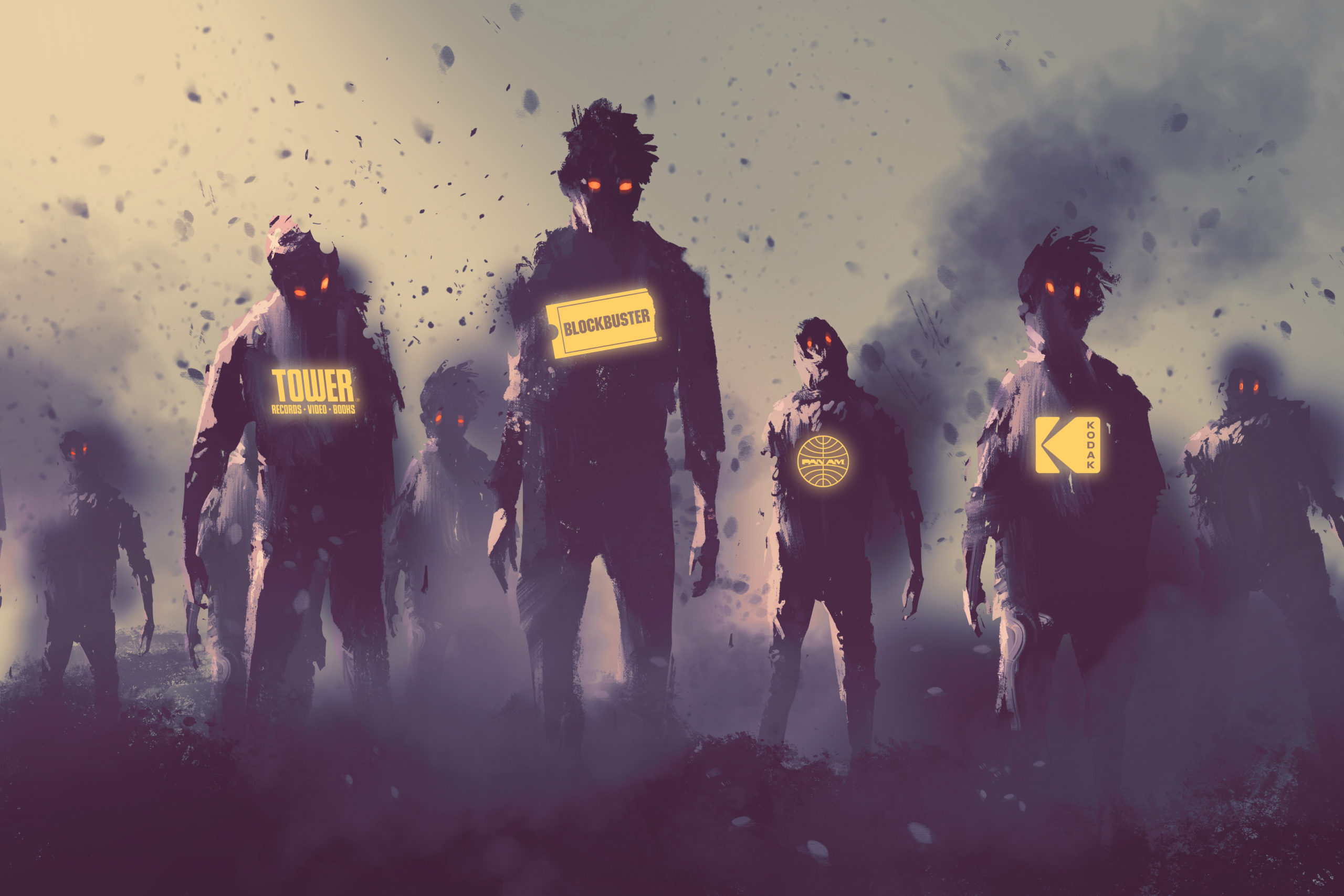 Six Branding Mistakes That Could Send Your Company to the Grave

Branding mistakes are deadly sins. Yet, they are often avoidable. Here's how to avoid a grisly branding fate this Halloween.

When it comes to the corporate world, bad branding can be a deadly sin. However, ‘bad branding’ comes in many different forms. Your brand is your business in human form – the symbolism, colours, language, and images that make it a little less zombie and a little more Abercrombie – and it’s something that a business can’t afford to get wrong.

Bad branding is an avoidable business mistake. In fact, it’s so avoidable. If bad branding were a movie, it would be Cats. Why? Because on paper the film had everything it needed to be a glowing success. A stellar cast. A beloved West End musical behind it. Music by Andrew Lloyd Webber. But it was a universal failure. Really avoidably awful.

Just like Cats, your business could have an excellent product or service and a team of business masterminds behind it. All the tools could be in place. But with poor execution – an organisation rife with branding mistakes – your brand will be heading to the grave faster than the residents of Haddonfield on Halloween night.

Here are six branding mistakes that will have the grim reaper wielding a bankruptcy-shaped axe at your business – and how to avoid this deadly fate this Halloween.

As they say, honesty is the best policy. Dishonesty in branding leaves businesses redder in the face than a five-year-old who has just been put on the naughty step for not sharing at a playdate. Dishonesty, as a branding mistake, can come in two forms: one, misleading branding, and two, outright lies in marketing campaigns.

Misleading branding touches a fine line in the branding world. The nature of business copy is to jazz your brand up and make it sound less David, and more Goliath, and you’d think that people would be able to differentiate between lies and emotive engagement. But, alas, when it comes to not taking things seriously, humanity consistently sets a low bar.

We all know that Red Bull doesn’t literally give you wings. Yet, in 2013, they found themselves in legal hot water over their tagline, having to pay out $13 million after being sued as their product didn’t give a customer wings.

No. That’s not a joke. We know this is a crazy and perhaps isn’t a very flattering depiction of aspects of the legal system, but it serves as an example of the dangers of exaggerated copy. When it comes to slightly misleading branding, look no further than BP – the global oil conglomerate – that sports a flower as its logo. Fracking the seabed and using fresh, green imagery just doesn’t make sense, does it?

Dishonesty in branding or marketing will most certainly harm businesses in the long run, ostracising current customers and giving a team of corporate prosecutors a field day in court.

Branding mistake #2 – A lack of focus

Two of planet Earth’s unhealthiest companies, Coca-Cola and Apple, managed to very nearly self-capitulate in the 1980s and 1990s. When Coke introduced ‘New Coke’ in 1985 in the name of market progression, they experienced initial success. But, for some, what had been a staple of American culture – iconic in taste, feel and look – had fizzed and flattened its way to a carbonated car crash, and was abandoned less than a year later.

When Steve Jobs and Apple parted ways, the technology giant’s innovations flopped, and Apple’s profit dropped 93% in 1993. The company lost touch with what they’d known – and what had brought them success – for so long. Much like Coca-Cola, they unnecessarily skewed their focus.

Apple and Coca-Cola, in an attempt to move forward, very nearly crashed and burned. Their biggest branding mistakes were trying to change what people already loved. The companies severed the emotional authority they’d held over customers, and had they not quickly changed their ways, either brand could quickly have become a haunted spectre suppressed by their competitors.

Consumer connection is paramount in branding. One of the biggest branding mistakes is not ensuring that you’ve got every heart-wrenching, brain-tickling, and eye-catching story cohesively woven into a brand identity that touches the pain points of your customer. Brands that don’t pay attention to customer needs are asking to be ghosted more quickly than a philandering romantic unknowingly chatting simultaneously with two best friends on Tinder.

Brands like Blockbuster and Kodak failed to see how new technology could serve the needs of their customers better than what they were currently doing. This led to their grim demise.

Successful businesses solve problems. They recognise a gap in the market and fill it with a solution that customers simply have to have in their lives. Brands that don’t listen to customer needs lose connection. They appear arrogant and out of touch.

The corporate world is ever moving and the first step to securing an unbreakable bond with your target market is to create branding campaigns that make your offering not only irresistible to a customer’s heart, but reasonable to their head. With Bridge Studio, you can discover what makes your audience tick.

Lacking obvious differentiation is a branding mistake that will make you and your business look like clowns. And not the fear-evoking, scary types of clowns, nor the genuinely slapstick  funny ones, but the sort of sad, self-loathing clowns with tattered clothes and faded red nose.

The reason why clowns are so allegorical when it comes to a lack of differentiation as a branding mistake is that good clowns are meant to stand out. They’re meant to command attention. Brands such as Tesla are successful in differentiating through innovation – they’re at the forefront of the electric car market, pioneering the way – and creating something new is one of two ways to be truly different.

Generally, brands aren’t that unique. Some may even go as far to say that brands are scams. Aside from innovation, the only truly unique thing about a brand is the people behind it. The most successful brands entice customers on a personal level, telling the stories that makes the company more than dice on the stock exchange board game. To differentiate, make people like you.

You’d have to be mad not to.

The funny thing is, it’s usually the world’s biggest brands that commit this heinous branding crime. Remember, brands are built on reputation, and it is holistic factors that feed into this, one of which is the experience a customer has with a business.

Ryanair. Hermes. Sports Direct. If you’re British, you’ll know that these brands are viewed by some as less trustworthy than a restaurant whose food hygiene rating has suspiciously risen from 1 to 5 in a matter of weeks. IF bad customer service has harmed these brands – which, in the past, it most definitely has done – then imagine what it could do for a medium sized business?

Hire that extra person on front of house. Keep the toilets clean in your shop. Respond to your emails. These things may seem trivial. But average products and services often beat good ones purely on the basis of customer service. Why?

Because nobody wants to deal with morons.

Branding mistake #6 – Not getting professional help with your branding

Companies who try to do things themselves end up in one of two places: buying each employee a villa in the Cayman Islands after managing to reduce costs to levels that border moral questionability, or crashing and burning like Swedish Property Management company Locum who – whether done professionally or not – revealed this mortifying attempt at creating new brand imagery some years ago.

But it’s not the unfortunate language illusion presented that is the issue here. Locum’s branding lacks imagination or identity. It looks like it was thought up within five minutes on the back of a napkin at the end of a very tedious board meeting. There doesn’t appear to be any meaning or strategy behind the logo, but this is where a professional branding agency will get things right.

At Bridge Studio, we take your message, and turn it into something meaningful, powerful, and enticing to the consumer. Businesses are unique because of the people who drive them, and the best branding reflects the people, not the profits. We’re proud to have that at our heart here at Bridge.

Want to properly portray the power of people in your branding? Get in touch today.